It's Thursday, and another day at work.  The temp is supposed to only go up to 80 (F).  This weekend is supposed to be warm, up to 91 (F) on Saturday, but then after that temps begin to drop.  I have this funny feeling they'll drop fast.  One day we'll have Summer, the next day we'll be in the middle of Fall.
Yesterday was... interesting.  I'm not the only one who's calling the Idiot Jerk in the White House an extortionist.  Things to think about:  The White House released 5 pages of notes they say detailed the conversation between the Idiot Jerk and the Ukrainian president.  They did not release the actual transcript... which I suspect is far more incriminating.  The Ukrainians are claiming the White House had certain conditions which needed to be met before that call could take place, the topic of Biden and his son being an extremely important one.  Oh, and the Idiot Jerk suggested Hillary's deleted emails are in the Ukraine.
Republicans are distressed.  I work with several of the Idiot Jerk's supporters and yesterday they looked very solemn.  What they desperately want to say is "but this is how he is, he does things like this, ignore them."  The truth is they will accept any evil as long as they're are in charge.
For sometime I've said he's going to make Richard Nixon look like an alter boy.  For those not old enough.  Richard Nixon also had an election scandal, a little thing called Watergate because he was worried  he wasn't going to be re-elected.  Grab your popcorn folks, this is going to be very entertaining for Democrats.
I did a new ride yesterday, in Greece, from Agios Georgios to Chalikounas Corfu.  This is a short ride, just 7.64 miles.  The funny thing is while I was checking out my stats I got an email from Rouvy.  They were updating the top 10 cyclists for that ride.  Holy Crap.  Out of everyone who has ridden that route, I'm number 7. 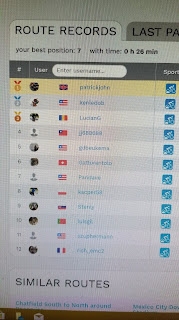 Here's the link if you want to see my stats.  And yes, if you want to follow me on Strava you can, they list me as the 3rd fastest worldwide.  What this really means is that not that many cyclists have ridden this ride.  Still, these little things are what makes this fun.  Oh, and yes, in case you didn't know... I am Paridave.