Wednesday... and schedules are due to be updated in the system.  I can't wait to see what mine looks like because it's been kind of crappy here lately.
Temps here are supposed to 92 (F), which is stinky winky hot.  And, of course, some moron at work claimed this was Indian Summer....  Sorry.  Indian Summer does not occur until after the first frost of the year.  Oh, and we don't always get one.  And some years we'll get two.  People just don't understand weather lore.  I don't expect them to.
And, of course, the Idiot Jerk in the White House termed his henchie Bolton, who's lucky, if this were North Korea he'd have had his ass fed to the dogs.  The firing was... messy.  You know it's bad when things like this turn into Twitter Affairs.  But then the Idiot Jerk lives for Twitter.  Twitter keeps the spotlight on him.  He needs that.  I found it interesting that, at least from what I heard, two voices kept him from bringing the Taliban to Camp David:  Bolton and Pence.  Now, one of them is gone.  Rejected and ejected by the Idiot Jerk because he just didn't say 'yes' enough.  He'll keep Pence around because he can't afford to alienate his Crazy Christian Base.
I also saw where the North Koreans want to sit down and chat again.  Is another breakfast buffet in the works?  How is this for speculation:  with Bolton out of the picture, the Idiot Jerk can, courtesy Air Force One, fly Kim Dumb Shit to Washington for an "very important morning meeting on the Mall."  Hey, with maybe a stopover in Disneyland so Kim can ride Magic Mountain!  Even though Bolton hated everything that wasn't pure, white, and American, he did wield some control over the Idiot Jerk... now he's gone. Soon to be replace by a 'yes man' extraordinaire.
I began playing Greedfall last night.  This game is from an independent group of game developers named Spiders located in Paris... yeah, that's right, the City of Light.  Right now, if I'm correct, about 22 people are employed by Spiders.  This is amazing when you consider how complicated video games are these days.  Developers like Bethesda employ hundreds of people and have studios all over the United States and Canada.  Because Greedfall is a Role Playing Game, you can have relationships with most of your companions.  So I tried to pick up the first Companion I signed up:  Kurt.  Of course, I got rejected.  He's still suspicious of me.  But, it's a role playing game so that can change. 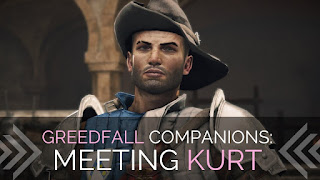