Yippee Skippy!  I get to go back to work today.  The new schedule is posted, and even thought I don't have a fixed schedule, I seem to have the same days off every week.  I seem to be getting Mondays and Tuesdays off every week, except for next... Kid's Workshop.  I've been requesting off on the first Saturday of every month and that tends to throw my schedule off for that week.
And... of course... everybody knows that a formal inquiry into the Articles of Impeachment has been initiated.  Remember, this is just an inquiry which can be a very lengthy process.  I'm suspecting the intention is more to add more damage to the Idiot Jerk in the White House.  True, they may get to a point where a formal vote is held, but until then we'll get to see the Idiot Jerk in the White House running around like a screaming banshee with his hair on fire.  He has turned into the dastardly CEO whom the majority of stockholders want fired.  Not that he doesn't have his loyalists, those sycophants and dingle-berry 'yes men' who leech off of his power.  Oh, and there are also the Crazy Christians as well as your dumb as brick Republicans.  They will have no problem following him down the toilet when we finally flush the damn thing.
I didn't see it, I don't have cable, but evidently last evening Faux News started shooting fireworks out their ass....   Anger, you know?  Quite a few Republicans are attempting to make comparisons to the Clinton impeachment simply because of the word... impeachment.  They believe the Idiot Jerk was handed his re-election.  Not even close.  Clinton is quite charismatic while the Idiot Jerk is not.  Independent voters stayed with Clinton.  The Idiot Jerk is driving them away.  The Republicans kicked like a dead horse, over and over and over again.  All the Democrats have done is constantly poke the Idiot Jerk with his own lies and actions.  Under Clinton the economy was growing... now:  Consumer Confidence dropped seriously in August.  Re-election for the Idiot Jerk?  No way.  Republicans still don't understand he was sent to destroy them.
On the light side, I went to see "Downton Abbey" last evening. I enjoyed the film.  Those two hours were a bit of a souffle, light and tastefully amusing.  Maggie Smith was definitely the stand out with her tartly sarcastic one-liners.  The drama was never overcooked.  King George looked kingly.  Robert has a dapple of salt and pepper.  The theater was rather full.  When we bought our tickets, we were told "well, this is the number one movie."  Who'd have thunk... Downton Abbey.  Oh, and I did stand up and survey the audience.  I can guarantee Aaron Schock was no where in the audience. 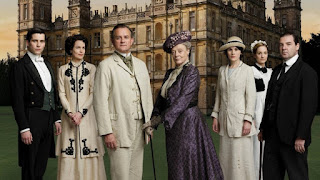