I start my split days off today... no work, and the dogs let me sleep in another 15 minutes.
Montana had an early snowstorm.  The Southeastern states are having a rip-roaring heatwave.  As climate change continues to effect the world, people will begin to move.  Yes, even in the United States.  This is called immigration.  And animals, too, as their natural habitats grow too wet, or too dry, too cold or too warm, will head towards more habitable areas.  So many people in the world are totally unprepared.  Things like this have happened before in our billion years history.  The difference between then and now?  Someone is here to record the changes.  This will all become very interesting.  If you're thinking of retiring to some sunny trailer park in Florida, keep in mind that expensive mobile home may be underwater sooner rather than later.  Here's one projection: 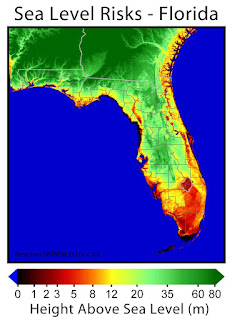 The smart ones will prepare, the dumb ones won't.  You know who I'm talking about, those fools running around in their little red MAGA hats.  And then they'll shriek "how can this be?!"
So, what am I going to do on my day off?  Lots of little stuff.  Ride bike, of course.  I got 11.1 miles in yesterday.  I find that I'm not as sluggish if I ride.  Those 2 weeks when I was trying to do that 5 rides a week challenge screwed up my schedule for a bit.  You only needed 15 minutes a day.  That doesn't work for me.  I need to get between 45 and 50 minutes a day.
The Idiot Jerk in the White House had his Henchies throw a whine-a-thon yesterday.  Sadly, neither Stevie, nor Lindsay, nor Jimmy Jordan.  Jimmy had to deal with Jake Tapper.   Jimmy ended up his Crazy Christian head slapped silly.  And the rumor's going around Mickey Mulvaney's job might be in the shitter because he didn't have a working plan to deal with... impeachment.  This administration, this political party, is so out of touch with America.  They don't understand that the first big step towards making America great again is to impeach the Idiot Jerk in the White House.
Posted by Dave R at 7:03 AM