So, it's Thursday.  I get to work today and tomorrow, and then I'm off a day, back on a day, and then off a day.
I'm probably going to go see "It,2" or whatever it's called on Monday.  The film is going to make a lot of money.  The first part was done well, let's hope part 2 is just as good.
I got my stats yesterday from the month of August.  I was so pleased I started showing people.  Now, I get to show you what my cycling was like last month. 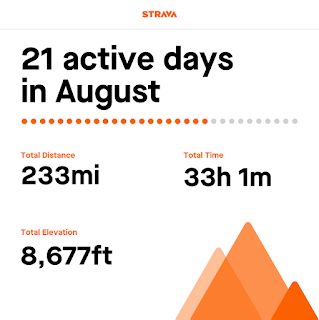 Not bad, eh?  As you can see, I'm working on my climbs.  Your legs are the engines of your body.  The best way to strengthen them is to use them.  11% grades are ruthlessly bad.
It looks like that narrow minded conservative Boris Johnson had his boris slapped repeatedly.  He was ignorant as hell to Theresa May, but at least she managed to hang in there for what?  almost 2 years?  I wonder if he's going to cry in public.  I mean, he was down and they kept kicking him.  That's a brutal ego treatment.  He deserves it, of course.  Over the past couple of days we've gotten the sort of high drama Masterpiece Theater used to dole out weekly.
And the numbers of people furious at the Idiot Jerk in the White House are rising.  He and his hateful base simply do not understand that taking $3.6 billion from the military, from projects already approved, in order to build his racist wall does not go over well with... the military, for one.  At least one school is not going to be built in order for him to give his hateful Evangelical Base the wall.  Puerto Rico?  Well, he's always hate Puerto Rico, an island where people have brown skin and speak Spanish.
Oh, and just wait and see how much aid we send to the Bahamas...  Conservatives see no value in spending their hard earned tax dollars on helping a country so devastated.  It's their greed factor.  This is a mountain they will never climb.