Well, it's Monday and the nation is still reeling in shock from this past weekends mass shootings.  This is not a happy time, especially for Republicans.  I guess Mick Mulvaney said these killings should not be laid at the feet of the Idiot Jerk, of course, that's the type of response you expect from a spineless sack of shit, isn't it?  For them there is going to be terrible fallout going into an election year.
Schumer said the Senate should come back early from their August recess to vote on gun legislation that has already been passed by the House and Mitch McConnell fell down yesterday morning and broke his shoulder.  Convenient, huh?
Texas, which just celebrated 6 weeks of looser gun laws, has turned into the poster child for Gun Control.  Oh, and how many Republican Congressmen have decided this is just not a good time to run for re-election.
Rumors are also flying that the Idiot Jerk didn't slap the additional 10% on China because negotiations are going slow.  Nope.  People are whispering that he did it because he wants the Fed to drop the interest rates even more.  I guess he seems to think the best way to grow the American economy is to put the American people deeper into debt.  Wait, hasn't that always been the Republican economic credo?
And finally, as some of you are aware, I'm working on a 3rd book:  The Body in the Well.  This mystery takes place in and around ghost towns in the Colorado Rockies.  This meant creating fictitious towns, the most important of which is located by the old Rattler's Den silver mine.  Since sometimes it's difficult to envision non-existent towns, I drew up a little map.  Without further ado, I give you Rattler's Den. 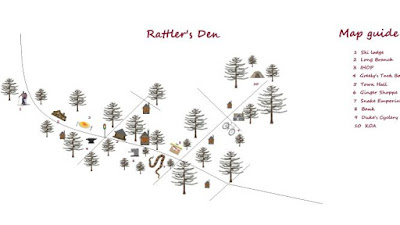 The only bad thing is I didn't have the margins set up correctly so some of the edgy stuff is missing.