Three more days until my weekend!  I was going to take off today because the new coffeemaker is being delivered... but decided I didn't want to waste the personal time.  I like to have a  certain number of days on the books, just in case, if you know what I mean.  Last winter I endured a bad sore throat and used 2 days, as an example.  Unexpected things happen.
No cycling tonight, I rode the Charlie Baker Time Trial last night.  I cut almost 3 minutes off my last time but was still almost a minute longer than my fastest time.  You can blame it on the Bobster... Yep, that's his name, who ever that is.  He was a mile and a half ahead of me on the course and I didn't really want to catch up to him so I kept my pace slower than normal.  At one point he was only 1.3 miles ahead of me and so I slacked off.
I guess the Idiot Jerk in the White House went on a little tirade yesterday.  He once again said Jews were disloyal because they didn't bow to him, and repeated how 'nasty' the Prime Minister of Denmark was for calling his obsession with buying Greenland 'absurd.'  This man is getting angrier by the day.  Tough Shit.  He said he was the "chosen one" to go after China.... chosen one?  Hell, if that wasn't directed at his Crazy Christian base.  Being challenged on all sides is not what he is used to; in the past he's hired attorneys to shut them up.  Farmer's are beginning to threaten the USDA because of his tariffs and he can't fire them.  This is all very bad news for his re-election campaign.  Now, ain't that a good thing.
Jay Inslee has decided to drop out of the race of the Democratic Nomination.  That's another good thing.  In the end, I suspect it will boil down to Biden, Sanders, Warren, Harris and Booker.
And finally, I was sitting in the living room on my day off and looked out to see Lily sitting on the futon looking at me.  She is such a cutie.  I took a snap. 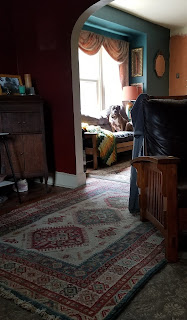 Of course, I call it "Lily on the Futon."  She looks so tiny, doesn't she?
And another 'oh.'  In case you didn't hear Hickenlooper is going to run for the Senate in Colorado.  This is one of those challenges which terrifies the Republicans, because he's going to win and they will lose a seat in the Senate.
Posted by Dave R at 6:07 AM