Oh my gosh, can you believe August is nearly over!  The nights are cooler.  Waking up the temps are usually in the low to mid 60's (F).  That's a good temperature for big dogs.  Mine go for a walk in the morning when I finish writing this.  They love it.
I have 3 games ordered.  Two, Greedfall and Breakpoint should be arriving within the next week and a half.  The Outer Worlds has an expected delivery date on 10/28.  I began playing video games over 10 years ago when I found out that a game called Mass Effect had same sex relationships.  Interesting.  Very rare back then.  Then I saw a study which theorized game playing strengthened hand / eye coordination.  Because video games force you to use cognitive actions, they are being looked at as way to slow down the onset of dementia.  More and more older people are now playing video games.  Personally, I like games like Assassins Creed and Wolfenstein.  Role Playing Games make you use your noggin.  Many of them require stealth.  While I like first person shooters, I'm more of a stealth player... I like clubbing the hell out of my enemies.  Here's a little vid about Greedfall... there are some real hotties in the cast.


And I guess Dorian is supposed to hit the Atlantic side of Central Florida.  The Idiot Jerk in the White House is so concerned about Mar Lago the state he has cancelled a trip to Poland.  They're predicting a storm surge, you know?  And Mar Lago Florida is a very low lying state...  Just think! 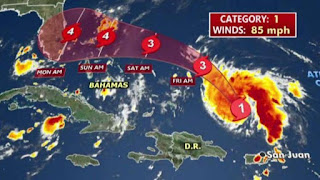 That surge of salt water might ruin the golf course create a lot of property damage.  This is the type of concern we expect from a president.
Posted by Dave R at 6:18 AM