Well, I actually did sleep in this morning.
Both dogs have colds.  Seig showed symptoms first (sneezing & runny nose).  His has just about run it's course, but Lily's is kicking in.  The only problem is having them sneeze in your face.  They're dogs... they don't know any better.  There's a lot of... spray.  I'm so glad I'm not one of those hyper-sensitive types.
I saw that even after calls from her own party to resign, that bimbolina Candice Keller from Ohio has refused.  She's saying she a conservative and this is what a conservative believes... of course, we all know conservatives haven't a spare modicum of intelligence.  She said she's going to let her constituents decided: retire her ass fast.  Put her out in that conservative pasture where she can drop her cow flops with other conservatives.
And the Idiot Jerk in the White House is going to Toledo... (wait a minute...) he means Dayton (he stands corrected) and El Paso today.  I'm sure they will do their damndest to keep protesters away.  His sycophants are desperately trying to keep his ego safe.
I went to see "Hobbs & Shaw" last evening.  It was really entertaining.  This was definitely a work of testosterone inspired fantasy.  And for those who are wondering... yes, Dwayne takes off his shirt.  In fact, at one point he's dressed as a Samoan warrior.  The supporting cast is great.  Ryan Reynolds!  and he is funny.  Actually, this movie is almost a comedy, what with all the tit for tatting going on between Dwayne and Jason.  Sadly, Jason does keep his clothing  on - no skin.  I mean, nothing that you could really sink you teeth into.
And finally.  I thought this was interesting.  From time immemoriam  we've been told that the Milky Way is a flat, disc shaped galaxy.  Well, that's wrong.  We've got curves.  That's right, our galaxy is a little... bent, if you know what I mean. 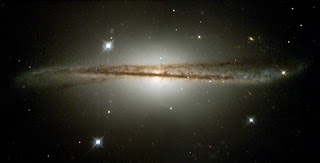 Pringle shaped is what they're saying.  That's right!  It's like a tasty potato snack made from stars and planets and gas clouds rather than itsby bitsy potato parts.  If you click on the link there's an animation where you get to see the Milky Way move.  Tasty, huh?