Your Tuesday is my Monday.  I only have 4 days to work this week and it's going to be slow.  We will get those couple odd customers who will stop in to see what's on sale.  Yeah, we do have a Labor Day Sale.  Surprise, it's the same stuff we had last Labor Day.  What will be more interesting will be the coming price increases.  Yepper, they're going up.  They've already started.  We are in that Top Five list of retailers who are going to be slammed by the tariffs.
I got a nice ride in yesterday... inside.  It's the safety thing.  Sunday mornings are fine, the traffic is thin and safe, and once I'm get to Tower Road things are fine... it's just getting there.  Shady Valley Road (yes, that's its name) has become a major thoroughfare and I not only have to cross it, I have to ride along it for a half mile.  Damn.  While stats are still coming in for 2018, here's a link to the stats for 2017 regarding cycling accidents.  783 cyclists were killed as a result of auto / bicycle crashes.  The number of injuries, however, is the real eye opener.  There were 45,000 injuries due to cars hitting cyclists.  That's a lot of broken legs, and arms, and collarbones, and fractured skulls.  You see drivers are easily distracted.  There are lots of bumble brains who feel they can multi-task (drive and talk / text) at the same time, or they're fidgeting around with the radio because they need to find a song they really like, or they're fantasizing about the hot guy they saw at the club the night before.
And so yesterday instead of going out on the road, I found myself peddling up in Oregon... Warm Springs, Oregon to be precise. 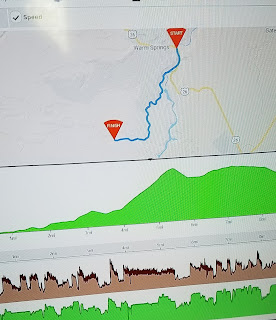 Do you see that big hill?  That's about a mile and a half long.  And since I have Cyclops Magnus my legs felt every inch of it.  And because I have Rouvy the scenery moved past me, and this is what it looked like. 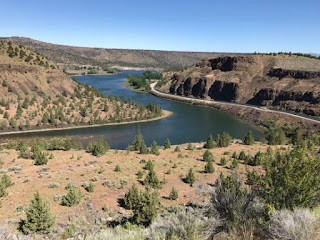 Now, isn't that a lot safer than chancing I might get hit by some bimbo talking to her BFF Grizelda about the great deal she got on a blue blouse at Boscov's?  And most surprisingly, on that ride, I only passed one vehicle... in the far lane.
In politics, the G7 is over.  The Idiot Jerk may have wanted to Grand Stand the meeting but, from what I've been reading Macron shrewdly outmaneuvered him.  Except for a few still shots our obnoxious asswipe of a president was fairly indistinguishable.  Of course, he did lie about trade negotiations with China.  Duh.  There is not going to be any real deal.  Nope.  The Chinese are going to continue tightening the screws.  You see, we have an election coming up... and they're going to make him Cave in a big way.