So, after the Viewing yesterday, I went home and changed into something more comfortable and ran a few errands.  One of those was going to Pier One to buy some candles. I buy most of my candles there since they're less expensive than Yankee Candle and have a decent variety, otherwise I avoid Pier One.  Pretentiousness, you know?  The last candles I bought (2 months ago) were called 'Linen' and I was told that scent was part of "our winter collection."  Yesterday a clerk was walking around with a customer in the candle section and I heard her say "this is Orange Whisper, and it's part of our Fall collection."  Give Me A Break!  I but candles because of color and scent, not because they're part of a seasonal collection of scents.  Yesterday I bought 2 red candles and a blue one because... I liked the color red and the color blue and they smelled good.

I don't buy anything else at Pier One because, let's be honest here, most of the crap they sell looks like it was designed by a failed HGTV Home Decorator.  And most of it looks phony.
After Pier One, I stopped by the Gay Giant in Camp Hill, because it was nearby.  It's called the Gay Giant because it's a straight shot across the Harvey Taylor Bridge from the gayborhoods of downtown Harrisburg.  Being the only supermarket within 3 miles, the clientele is, at times, very gay, very lesbian, and very... well everything.
And, of course, yesterday being a nice day, the back door was open quite a bit, which meant that the dogs were running in and out all day and having a blast.  Last evening I found Big Seig sleeping on the futon with his moose. 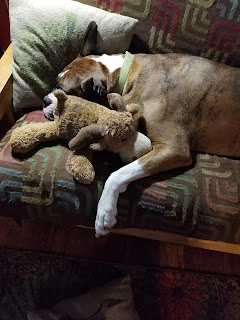 Ain't that the life?