So, I saw a headline about Beyonce posting a picture of herself and her kids and supposedly the Earth went wild... if that's the kind of thing that gives your life importance, I can only wonder if your life is truly that shallow.
I didn't mow the lawn yesterday because we were supposed to have thunderstorms... which we didn't have... which we actually got this morning while I was at PF - torrential rains, you know?  The Three Caballeros weren't there, which is par for the course.  They seem to belong to that group more interested in putting in an appearance than in developing and maintaining and in failing to understand that simply going to the gym does not improve the quality of your life.  Me?  Well, I wasn't gong to do any cardio yesterday, it was supposed to be my day off... and I ended up burning away 50 minutes on the elliptical - about 560 calories.  Increasing the ramp level increases your heart rate and as I raised it for the 4th time I wondered if I was turning in a Cardio Junkie.  Wouldn't that be a hoot, now?
And I did bake a loaf of bread. 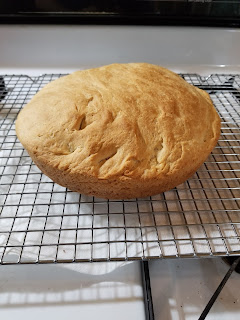 Used a cast iron dutch oven.  It looks grand but tastes a bit bland, so I may have to look for a different recipe.
Also interesting to note:  Today is Bastille Day, a turning point in the French Revolution.  And the Idiot in the White House was invited to attend the festivities by President Macron.  I do not doubt that the relevancy of the moment will be lost on the Idiot, that he will even come close to understanding that during the French Revolution very, very many of the French 1% lost their heads.  He will totally fail to see any correlation between himself, his family, and his billionaire cabinet and the noblese of that time.  But then, what else would expect from the Idiot in the White House.
Posted by Dave R at 10:03 AM