This morning at Planet Fitness was interesting.  I have a routine that I follow however, since I'm a versatile kind of guy, I have to shake it up, do it out of sequence, and that happened this AM because the Three Caballeros were using the chest equipment and they were chit-chatting behind me while I was doing my presses.   Holy Crap, talk about shallow pretentiousness.  Each has their own water bottle, their own towel, and a pad to jot notes in:  one has a fancy clipboard in a case and the other two have steno pads (that's right, steno pads, I didn't know they made those anymore).  And they surround themselves with their "equipment" and then stand there a chit-chat.  Note, they don't really talk.  Talking is using words that have meaning in a way that creates an idea which makes sense.  Chit-chat is air passing over vocal cords to make sounds which most often have no logic.  So, instead of doing my hammer curls, I went over and did my sets of Lat Pulldowns until they gathered their "gear" and moved on.   As a result, I ended up stretching my gym time out another 10 minutes, which is actually a good thing so maybe their chit-chat about using "using coupons to buy meat," had some value after all.
And speaking of stretching, what about the Idiot Jr?  Emails?  "Love it!"  Evidently the media isn't stretching for their truth, and the Idiot's claim that they're involved in a 'Witch Hunt' is just a stretch of the truth.  I mean, you have to admit that this is funny as hell.  All of those Conservative morons voted for a Traitor who had no problem asking a foreign government for help in winning the election.  A foreign government, by the way, that wants to make America Ungreat.   I also have no doubts that this is one of the main reasons McTurtle has demanded Congress delay their August recess.  In fact, it would surprise me if Conservatives all over DC have seen the Cyrillic Eviction notice written on the White House Wall. 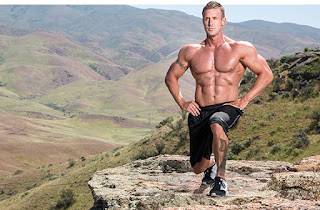 Of course, there really are a lot of different types of stretches, just like there are all sorts of words, and sounds, and the Idiot and his entire family seem to have no problem in taking the truth and pulling it tightly onto the frame of their preferred reality.  Me?  Give me real, muscles any day.
Posted by Dave R at 8:59 AM