Gods of Egypt - Rising above

I saw Gods of Egypt last night... and liked it, of course I didn't for over my money to see moments of great drama between Gerard Butler and Nikolaj Coster-Waldau, and I didn't buy my popcorn anticipating dialogue so steeped in logic Spock would have been enthralled, in fact some of it's a bit absurd, but that's okay.  It's a fun movie.  There's a lot of complaining about the CGI - well, there is a lot of it, but it's all been produced by top notch CGI units, so get over it.  Have you noticed that people always seem to complain about the CGI in movies heavy with it?  And not all of the reviews coming out are bad.  There was this in The Atlantic, and this in The Guardian, and of course this from the NYT; I like the bit comparing it to the "art-filled exploitation film The Revenant."
And then, of course, there is the whining about it being 'white-washed.'  I hate to break it to people, but not every film produced is going to have a minority in the lead.  If that were the case 'Carol' fails terribly - no minorities, and 'Room' - no minorities, and 'The Revenant' - no minorities... well, at least none of consequence.  But then those are serious films, right, and the 'no minority' objection doesn't apply, right?  But this is a hot-button issue right now so everybody who wants to be anybody is jumping on board and pressing it.  In other words, people are judging this movie with their baggage already packed.
I liked it. So did my friend.  There's a lot of action in it.  And, of course, a very large Nikolai Coster-Waldau. 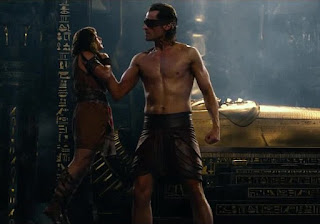 But then everybody wants to be a critic and I don't know why.  If you spend all your time looking for flaws, you're going to start finding them everywhere.  Millions and millions of people who have never made a movie in their life, and have no clue as to how to even start, are trying to tell Hollywood what needs to be done, and what needs to be fixed.  In fact, too many people are too busy trying to point out what's wrong.  The Gods of Egypt is a fun movie.  It has no pretensions, so don't go looking for any.