His sudden death does create a dilemma for the GOP because they have stalwartly stomped their foot down on any and all nominations put forth by Obama even though there are 339 days left until the next president takes office.  You see, they loved Scalia's narrow, tunnel vision conservatism and without his negative voice on anything remotely moderate they are lost.  And so they are praying that by shutting the door on a new Supreme Court Judge until the next president takes office, and praying even harder that the next president is a Republican, then maybe, perhaps, they might not lose that negativity.  Of course this makes them look bad, but when as that bothered them.  They are not concerned about what's best for the country, what's right according to the constitution, nope, they're more concerned about themselves and their inability to change. 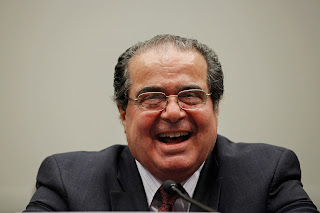 So, how do you solve a problem like Scalia?  How do you get your cake and eat it too?  You do what he would have done.  You say "no!"  Unfortunately for the GOP all Obama needs to do is nominate moderate judges, moderate judges of color, moderate females, moderate males of any and all religious affiliations.  Moderation is the word.  You see every time they say "no," the corner they're painting themselves into gets smaller.  And the nomination of a moderately conservative judge?  Well, would you really want a president who's only interested in satisfying 28% of the American voters?  I mean, they can't even come halfway.  So, by dying suddenly, Scalia has handed them a plate of shit and, of course, they're not going to eat it, and they're not going to wipe the plate clean, they're just going to stare at it praying that as time goes by it disappears.