Not feeling the Bern here

I didn't watch the Democratic debate last evening between The Bern and Hil because... well, I don't watch debates.  I read stuff on the Internet instead; positive stuff and negative stuff.  Some people don't the negative stuff; they don't like thinking there might be little holes in their balloon.  No, they want their balloon to lift them up, and up, and up.  They want to be starry eyed over their candidates and believe the words falling from their lips are silver.  What these people really need to do is look at the tarnish and understand that it's a flaw.
Let's face it, even though you may not want to believe it, Hilary has more suits of matching luggage and steamer trunks then Beyonce, and that's a lot of baggage.  If she gets the nomination you can be the Republicans are going to unpack every single piece of it and there will be nothing private about her privates.
As for Bernie?  He's just too old.  He'll be 75 years old when we vote for president.  That would make him the oldest president ever elected, by 6 years.  Right now the oldest man ever elected president was that Republican god, Ronald Reagan.  Believe me, the Republicans will attack his age relentlessly.  There will be a constant stream of Senior Citizens decrying a Bernie Sanders presidency, saying his age is a debilitating factor.  It doesn't make a difference whether you like his message or not, his age makes him fairly unelectable. 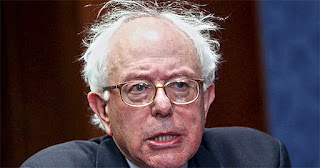 While the odds of Hil beating Trump (the assumed Republican candidate) are very good; they're the same age.  If it's Trump against Bernie the odds are favoring Trump as Commander in Chief, and we know what kind of freaking mess that would bring.