Meanwhile... back on the ranch

Well, I saw Jeb dropped out.  This was inevitable.  He was milquetoast next to Trump's racism and bigotry.  He came across as perhaps a nice guy, even though he wasn't the brightest crayon in the box, and the Republican base is looking for a nasty boy.  More then anything else, however, he was George W's brother.  That really hurt him.  No one in the Bush family seemed to know their name is scarred worse then Ryan Reynold's ass in Deadpool.  Of course, they're super rich so there is a lot they don't understand.  They don't understand the repercussions of having one of the worst presidents in American history standing prominently in their family tree.
So, one wonders what Jeb's doing now that his hours of free time have just increased... dramatically.  Wouldn't surprise me if he didn't stop by the Crawford ranch.  You know?  Where W lives?  And maybe pay is big brother a visit.  And somehow, I don't think they're going to be going on a run together. 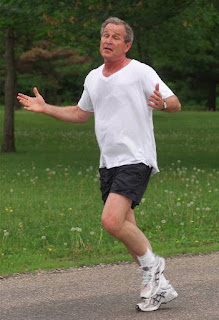