It's been one of those weeks, if you know what I mean.  I had to deal with a customer who called Corporate and complained about one of my associates - never a fun thing.  The claim was that my associate treated her so rudely, this customer probably would never shop with us again.  So, I called her and arraigned for her to come in the next time I worked, and of course she lied, and she lied another time two days later when she bought the most expensive paint we offer and wanted it at the lowest price possible.  And though she's now sitting smugly at home thinking she pulled one over on us, she's been red-flagged in the system.
Anyway, I went to see Deadpool last night.  I was impressed as, evidently, quite a few other people have been since it appears to be raking in money.  It's very funny, lots of one liners, so many in fact you really have to pay attention to what's being said - that's a good point, the audience stays focused. 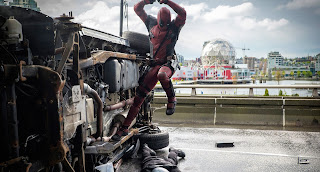 I like the fact that's it's geared for an adult audience rather then a family audience, I'm not 14 so don't treat me like I am.  In spite of the fact that at times it plays like a comedy, this film takes itself very seriously.  I thought that the drama of a late stage cancer diagnosis was juxtaposed against Deadpool's revenge nearly seamlessly, and the mutation scenes definitely did not have a Saturday matinee family audience in mind when they were filmed.  It has bad language, nudity, and violence.  What else could I ask for after dealing with a blonde bimbo trying to rip me off at the store?