Well, maybe not... actually, not even close.  I did see something interesting on Customer Satisfaction earlier, so I'm posting a link.  I know people aren't really satisfied.  I talk to them daily.  Having associates who do their job well, helps.  When you have one who consistently drops the ball... that's another story.  I have one - he's the nicest person you ever met but slow as molasses in January.  And mistakes?  ooohhhh   He has sheen problems, a customer asks for semi-gloss and he mixes flat.  There are other issues as well.  Like I gave him a paint label, showed him the can of paint it needed to go on and... he put it on the wrong can... and, of course, the customer said "this is not the paint I ordered."  Instead of mixing 2 gallons for 2 people, he mixed 3 gallons for 2 people and we ended up writing off one of those gallons, simply because he put the wrong label on the wrong can. 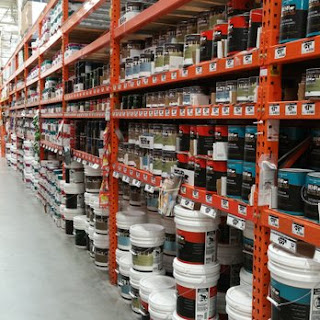 When you talk to him, which I've done several times, his response is always that he must have gotten distracted.  He gets distracted easily.  In fact, all you have to do is wave and say "hi" to him and you'll throw him off.  These problems are going to show up on his review.  I'm going to see if I can get him moved to a department where he doesn't cost the store money.  As I said, he's a nice guy, however I had to write off over $300 in paint last week because of his mistakes.  Perhaps I can get him moved to Hardware where all he has to do is sell nail, and nailers and deck screws.