Those crazy Texas Republicans hate Planned Parenthood.  I mean, they really hate it.  In fact, they pretty much eliminated it, setting up their own version which conforms to their Crazy Christian beliefs.  And they claim their system is working wonderfully.  And, of course, they're wrong because they're Crazy Christian Republicans with a very narrow perception of what's really happening.  In fact, instead of providing healthy birth control for low income women, THEY ARE MAKING BABIES!  And Medicaid is paying for this increase in births. 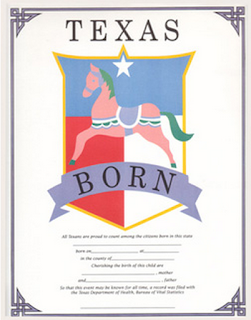 Anyway, I was sitting here wondering why it is Texas wants to increase their Low Income population?  Cheap labor, perhaps?  Maybe they want their crime rate to go up because it is statistically higher in low income neighborhoods.  Or, and this is most likely, they just hate Planned Parenthood because in their minds it is synonymous with abortion.  This is wrong, of course, but it's already too late for Texas because what they've doing down there is make Low Income Babies.