The Superbowl and Me

Today is Superbowl Sunday, I know this because yesterday and today you could "wear your favorite jersey to work," and I also had a female customer yesterday who asked "which team are you rooting for?"  You should have seen the look of incredulity on her face when I told her I don't watch football, in fact it was almost as if I'd turned into one of Donald Trump's Mexicans.  I explained that I really like cycling, given the Tour de France, making sure I pronounce France with an American accent just to make sure she didn't think I'd suddenly turned into one of Donald Trumps hated French Mexicans.  Her response?  She said "oh," picked up her paint and walked away.
Honestly, I haven't watched a football game in years and years and years; the sport just doesn't interest me.  Yet Americans seem to think you need to pick a team, root for one side or the other, and buy all sorts of happy horseshit clothing to show your support.  If you don't, they will give you a sideways glance as though you're an embarrassment; not quite as true, blue an American as you should be.  It's the same sort of glance Republicans give Independents, as though their patriotism is somewhat phony. 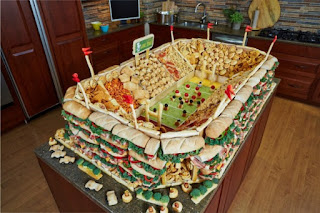 Anyway, the Superbowl is never really quite what it's supposed to be, a playoff between the two best teams in America.  Nah, it's more about commercials.  It's about throwing a party.  Eats and drinks, and maybe feeling a little too hungover to go to work the next day.  There's a half-time show that doesn't really dazzle when you watch it on TV, and ever since Justin Timberlake exposed Janet Jackson's pastie is very, very PG rated.  Who cares?  I don't.
What am I doing this evening?  Going to see 'Hail, Caesar.'  I'm gong to find out if it's a droll as it's C- Cinemascore says it is.