I felt I should write something down about Kim Davis since she is the faux celebrity of the hour and in the midst of her 15 minutes of fame, so to speak.  First of all, she's a very flawed Christian.  Too many people out there believe claiming to be a Christian makes you one, it doesn't.  When she had her little epiphany three years ago, did Davis join some Evangelical Mega-Church?  Nope, nor did she find favor with the Presbyterians, or the Lutherans, or the Methodists.  The Baptists had nothing they could offer her.  In fact, it seems all Churches with a set doctrine were pretty much off limits.  Davis chose to be an Apostolic Christian, one of 13,000 (give or take a few) who strictly follow the King James version of the Bible.  The Apostolic Church has 'lay' people, but no one is really in charge.  This type of Christianity allows Davis to cherry-pick want she wants to believe; she can be as hypocritical as she wants and still claim to be a Christian. 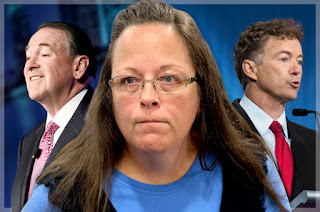 In fact, the Apostolic Church website provides little information about the Church itself.  From what I've read, they are very much against divorce, of course, three times divorced Davis has repented for all of her past sins.  In her book she's fine and dandy.  Since her conversion however, she has issued many marriage licenses to straight couples and there's little evidence she put much effort into querying those men and women in regards to their marital status.  Even though divorce is very high on the list of sins for the Apostolic Church, she seems to have had very little interest as to whether those applying for licenses to were on their first, second, or like herself, their fourth marriage.  This is a prime example of her cherry-picking.  Shouldn't she have preached the evils of divorce, rather than simply sign the license?  This is why she's flawed; why she's so phony.
This morning I read that her legal team is appealing her sentence, trying to get her out of jail.  Obviously, she's not only a flawed Christian, she's a phony martyr as well.
Posted by Dave R at 7:14 AM