When debates are futile

I didn't watch the RNC Debate last night because I don't have cable.  I could have watched it over the Internet had I wanted to, but, to be honest, I just didn't want to.  I did catch some of the clips this morning in articles which attempt to define the winners and losers.  The one clip I saw which explains everything about this debate cycle was the one where Trump lectured Jeb on his brother.  You know the one I'm talking about, where Trump said "W" is the reason we have Obama, and that the last 3 months of his presidency were so terrible even Lincoln couldn't have been elected.  Truer words were never spoken... and from Donald Trump, of all people. 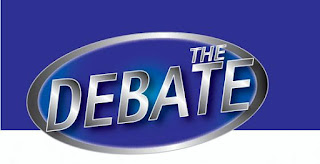 So bad was the damage done by George W. this country may go another 8 years before it elects another Republican President.  Which is why those debaters standing on the stage last evening were pretty much wasting their time.  It was, so I've read, the most watched debate in quite a number of years, but more so, I suspect for its entertainment value than it's political content.  Donald Trump is an entertainer.  He is outlandish and, for the most part, and extremely wealthy buffoon.  His comments on immigration, and women, and scaffolding around the Capitol Building, and just about everything else, reflect the short comings of the Republican Party.  The GOP is more likely to hit its nadir rather then get a president elected in 2016.  I can think of better things to do to waste my time then listen to 11 people attempt to prove themselves a winner by tossing out one-liners just to please the crowd.