I Got the Polling Blues

I was sitting here at the computer looking at the results of the Republican polls, and I realized that the later in 2015 we get, the more important they are since primary season is just a few months away.  Yes sir, primary polling is right around the corner.  This is the time when candidates are supposed to begin to slowly surge ahead of the wannabe front-runners, like Trump.  When I hear and read what he's been saying I'm reminded of a Tea Party candidate on steroids or Sarah Palin dealing with uninhibited PMS.  Carson is surging as well... well, he's going to go no where.  What he really needs to do is spend an afternoon reading all of those racist tweets the GOP base fired off when Obama won his second term. He needs to understand that no matter how popular his message is, in the end they're going to vote for the white guy.  And then there's Ted Cruz, who's turned into Donald Trumps number booklicker... need I say more.  If Jeb Bush really wants to win the nomination he's got to do more then just sit there like a baked potato waiting to be dolloped with sour cream and butter. 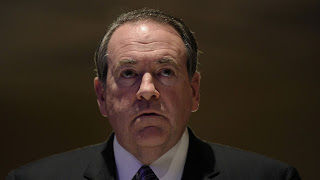 And then there's Huckabee who's gotten older and fatter since the first time he ran for president.  If you check out the Real Clear Politics polling website above you'll see he started off as an almost front runner but has been on the slow slide ever since.  I suspect he thought his involvement with Kim Davis would give him a boost in the ratings.  Haha, his numbers indicate his moment of grandstanding actually hurt him, except for all of the Krazy Kristians out there, you know who I'm talking about, the minority group who don't understand just how big a minority group they really are?  A while back someone foolish dubbed them the 'silent majority.'  Well, in actuality, they're anything but silent.  Perhaps if he pulled out his banjo and played a few bars of "I Got the Polling Blues," it might help.
On one of the polls I looked at I saw that Chris Christie polled 1% which was lower the the 2% None of the Above received.  Boy, that must be disheartening.