So, let me get this correct, Kim Davis is a wannabe martyr, who doesn't really want to be a martyr?  Didn't anyone ever tell her how much martyrs suffer?  Didn't she know they sometimes spend years in prison?  Did she ever hear of Nelson Mendela?  Does she know he's very famous martyr?  Did she ever hear of Joan of Arc or that she very, very famous religious martyr who was burned at the stake for her faith?  Would Kim Davis be willing to be burned at the stake?  And though her legal team did get her out of jail, did she ever stop to consider they'd raise much, much more money if she were... well, to be succinct, burned at the stake?  Does she know it would probably help their cause financially if she were to... well, suffer more?  Did she even consider that using a 'get out of jail' free card is going to diminish her martyrdom?  Or does she really only want to be thought of as a faux martyr?  Could it be that her legal team may have other plans?  Do they see her as a tool? 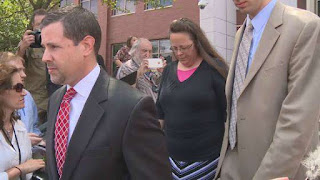 Was she really excited to find out she was going to be visited by both Mike Huckabee and Ted Cruz?  Does she know they're both running for president?  Did she consider they might believe visiting her would garner more support from the likes of her ilk?  Would that make her their tool?  Did she ever stop to consider they might use her as a tool to coalesce the support of a minority Christian group which will never help them win an election?  Of course, one has to ponder as to whether Kim Davis, in her widest, conservatively Christian dreams, even considers herself a tool?
And, on top of that, one does have to wonder if, at this stage of her tool career, if she has handlers?  Do they pick her wardrobe for her?  Tell her when she's to wear her hair up or down?
And now that she's out of jail, is all of that freedom going to go to her head?  Maybe not, because she just might be as happy as a pig in shit just to be a tool.
Posted by Dave R at 3:51 PM