Everybody has seen road workers wearing those very bright fluorescent yellow and green colors and not  because they want to make a fashion statement but rather for safety's sake.  They just don't want to get hit by a moving vehicle, hence my decision to call it Flo-Glo, they keep the traffic flowing all the while glowing.  You know what I mean, this stuff. 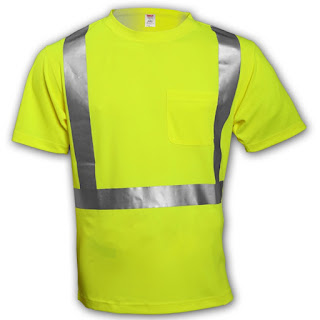 Anyway, there seem to be quite a number of people out there who've decided to take these colors and turn them into a fashion statement... a T-shirt fashion statement.  Now, I have absolutely no problem seeing men wearing T-shirts; it's a comfortable piece of clothing.  I wear them, usually not out in public, but around the house.  Back when my job kept me office bound, I wore them daily under my dress shirts.  Some people can actually wear them out in public and look damn good.  My friend Larry, back when he spent a lot of time at the gym, often wore T-shirts when he went out, and always one size too small.
Unfortunately not everybody is like Larry.  And these colors are very bright.  They're like little magnets that even the most steely-eyed person is drawn to, which is why there's a paradox.  What was initially meant to be a color to provide safety while keeping traffic flowing, is now being worn by many who either don't know better or who simply don't care.  I'm talking about guys with girth.  When it's a size XXL and it's still a size too small, you shouldn't be wearing it... anywhere.  Here's an example:  This past Tuesday I had some guy come up to the paint desk and he had at least 2 inches of drop-age. For those who don't know, drop-age happens when you're belly sags below the hemline of your shirt,  You know what I'm talking about... belly skin, sometimes really hairy belly skin.  Anyway, this guy comes up and orders a 5 gallon bucket of  Glidden, Semi-gloss, Antique White and I can barely hear what he's saying because he's got about 2 inches of drop-age resting on the edge of the paint desk... and, of course, he's wearing a Flo-Glo T-shirt, and, of course, I can barely hear what he's saying because my mind is screaming in horror.  Since I'm not allowed to lift 5 gallon buckets until October, I handed the order off to one of my associates.  Later she came up to me and said "why would anyone wear that shirt with that much fat hanging out."  And, my response was to shrug and admit that it was a paradox to me.