I think Donald Trump is a horse's ass, but that doesn't mean he isn't amusing.  Thanks to him a majority of the American people now know that a large majority of the Republican base hate illegal aliens.  To be more precise, they hate Spanish speaking illegal aliens.  They want to kick them all out and build a wall.  Hhhmmm.  However, the Republican base also likes Big Business because Big Business donates lots and lots of money to their causes.  In fact, Republicans, in general, love Big Business almost as much as they hate illegal aliens, which is where the bilingual paradox occurs.  You see one of the largest groups of Big Business is retail.  Retail Corporations (and they are corporations) earn billions and billions of dollars every year, and these Retail Corporations tend to funnel a portion of those billions to the political party which they feel is going to give them the best deal, oh, and retail is very, very pro-bilingual.  Walk into any Walmart, or Target, or Lowe's, or Home Depot and you're going to see two languages... English and Spanish. 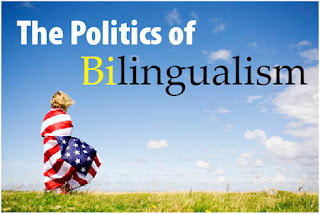 And everybody knows that the vast majority of those illegal aliens (who, according to Trump are Latino) have taken the time to become proficient in English before crossing the boarder illegally. Oops, well, that last sentence is probably not true, most of them can't speak English.  Do you think any Retail Corporation cares how people get to this country?  All they really care about is the money those people are going to spend, which is why they make it so easy.  This is a bit of a thorny issue for the Republicans, you see, becauseif by some odd chance Donald Trump were to get elected president, and if he were to ship out all of the millions of illegal aliens, retail sales would slump, which would effect the global stock market.  Think of all the jobs that would be lost.  Republicans can't have their cake and eat it too, which is why there's a bit of a paradox.