John Boehner is quitting his job.  His last day will be at the end of October - scary because the only thing he's managed to do while in the position is keep rabid Tea Partiers at bay... well, sort of.  However er, they don't want to be kept at bay.  They want to attack, attack, attack no matter how terrible it makes them look.  They want to shut down the government as often as they can in order to prove to themselves how powerful they are, without the least bit of consideration of the damage they're doing.  They headlines are interesting, most of them alluding to this fact.
However, I did see this little thing, about this little investigation going on which might also factor into his resignation.  Of course, he's not the only politician who's had problems with campaign financing.  You would think they'd know by now that money is like drugs, and the best thing to do is just say 'no.'  Oh, wait, that's right, I'm speaking about a Republican here.  Anyway, we'll have to wait and see if this pans out. 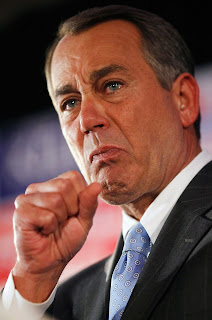 Personally, I've always thought he was a little too smarmy, even for a politician... sort of like 'old school' scum.
Of course, maybe it's true that he's quitting as a result of pressure from the Far Right.  If that's is the case it couldn't have happened at a worst time for them.  They have a clown parade of wanna be presidents, and they're going to replace Boehner with a Speaker who's going to 'let loose the hounds.'  Looks like we'll have another Democrat in the White House in 2016.
Posted by Dave R at 7:57 AM