Fatties and their scooters

I always like to scan through the news headlines first thing in the morning just to see what catches my eye.  One of the first things I saw was two of the founding members of the Hypocritical Society of America, Huckabee and Davis, standing together for a picture... well, enough said on that subject.

Something else that caught my eye was an article on walking, how the Surgeon General says we all need to walk more.  Six months ago, when I was on the verge of undergoing major back surgery, I'd asked my Orthopedic Specialist what kind of physical therapy I'd have during my recovery stage.  He told me what I needed to do was 'walk.'  That's it, nothing more.  Rather then wait until after the operation, I started walking right away, first with a walker, then with a cane, and finally without a cane.  Amazingly, all of those bulging and herniated discs fell back into place and my major surgery was totally unnecessary.  My 82 year old mother says it was Jesus... nah, it was walking.  Instead of laying around on my ass taking meds for the pain, I got up and walked.
Which brings me to one of my major pet peeves, fat people who ride around on one of these little scooters rather walk - laziness, you know? 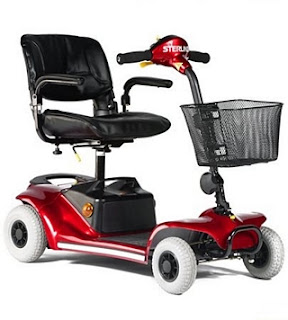 Now there are people who really do need to rely on one of these to get around, I know, I work in retail.  I see them driving by the paint desk with their portable oxygen bottles, and their braces and their casts.  But I also see the fatties.  You know who I'm talking about, those people who pinch themselves in between the arm rests.
My favorite fatty story is of the woman in my local Giant supermarket.  She was trying to maneuver her way around a corner wing-stack of tissues and got herself stuck.  As I approached her, she began to sob "I just can't take this anymore, I can't take this anymore."  Then I got a look at what was in her cart and the first thing I saw was two large packages of Oreo cookies.  And there was more, Cheez-itz and a can of spray cheese, and potato chips, and a package of Fig Newtons, and... her entire basket was filled with garbage food, nothing nutritious there.  Instead of giving her a hand, I walked by her thinking, she needs to get out of that cart and do it herself, and after that she needs to put that garbage back on the shelf and buy herself some food. But I know that didn't happen because a couple minutes later I saw her scooting her way down the ice cream aisle.
I think that what the Surgeon General really needs to do, rather then put out articles on walking that fatties are never, ever going to read, is to create "Kick a Fatty out a Scooter Day."  This would allow those of us who walk regularly, to go up to a fatty in a scooter and, with out fear of repercussion, tell him/her to get off his ass and walk.  Of course that will never happen.  We might hurt their feelings and they might have to eat another half-gallon of cookie dough ice cream.
Posted by Dave R at 8:15 AM