Today is Big Seig's birthday.  He's a nine month old Boxer... who's still growing.  He's called Big Seig because he's approaching 100 lbs... and he's still growing, and he's not fat, he's all muscle.  He's also a big, big baby.  I have a lot of pictures of him, but the one which gives you the best idea of how big he is was taken a month ago, when he was eight months old. 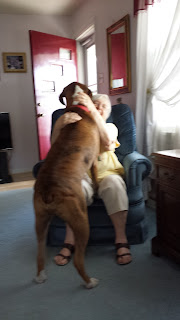 That's Big Seig with my 82 year old mom. Anyway, today's his birthday.  To celebrate, he and Lillian D'aubert, my female Boxer, shared a piece of white cake with butter cream icing.  Normally, they don't get people food, only on birthdays.

On a lighter note, I saw that Kim Davis was given a little soap box on Fox News last evening - didn't watch it.  I did read she said something to the effect that she wouldn't issue a marriage license to her own child if he was gay, and I thought, holy crap, if she had a gay child she'd be beating the gay out of him in Jesus' name when ever possible.  That's what crazy, religious fanatics do.

What I did watch was Steven Amell in Arrow on Netflix.  I like the show because it's definitely not PG rated.  And, on top of that, he's not bad looking. 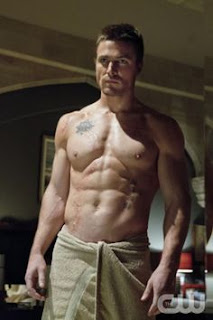 Though I have a funny feeling that in the real world he's a bit on the petite side, even though they say he's over 6 feet tall.  Now be honest, who would you really rather look at?  Steve or Kim?