Mine are bigger than yours

So, the drawing of my blood went fine.  Four vials.  I don't know why they take so much of my DNA.  About 4 hours later, I got a voice mail from them (I don't carry my phone around with me) advising that appointment next Tuesday and been switched from and 'in person' visit to a phone call.  So I sent them an email and said "nope."  I have never met this doctor.  I told them that as an Essential associate, I have come face to face with 100's of people since this thing began.  If I can do that, then this doctor should be able to sit down and have a 'face to face' with me for 5 minutes.  I'm hoping they say no.  Results of my blood work will be posted next week in my file.  I do understand the need for caution, but there's a difference between caution and paranoia.
I added dumbbell training to my workouts.  No soreness so far.
We're also under a heat advisory today, from noon until 8 PM with humidity.  Hopefully it will lead to rain.  We did get showers last evening.  Those around us had a thunderstorm, not where I live.
And the Idiot Jerk gave a briefing for his base.  Now he's saying it's good to wear a mask.  He also said things are going to get worse before they get better... but Covid is suddenly going to disappear.  His administration is having problems putting out a unified message.  They're worried about making him look like a lying sack of shit.  They will twist their message into an impossible shape in order to keep him from being wrong.  His base is going to believe he caved to pressure, which is what he did... kind of.  People want to hear science and what the get is dumb shit spluttering out some sort of half-assed campaign speech.
And, of course, people are looking at what he's doing in Portland.  His campaign ads are growing darker and darker.  Barry Goldwater used this approach trying to be a harbinger of nuclear war.  He failed miserably.  Remember, he wants to be a dictator in the worst kind of way.  And he's beginning to understand not only that he's unpopular, but that Americans hate him.
Finally, I made croutons yesterday, for salad as well as for snacking.  They're tasty.  And they're large.  Believe me, I have no problem admitting that mine are bigger than yours. 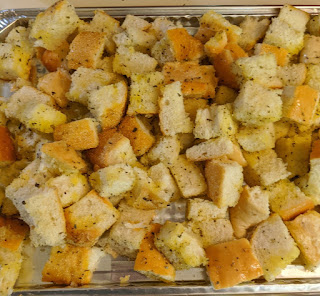