The Devil went down to Georgia...  oh, wait... it was the Idiot Jerk not the Devil.  Hhhm.  Same thing, for all intents and purposes.  It was just a short visit.  No rambling, stream of conscious stump speech.  I didn't see any pictures of him wearing a mask.  I do not doubt for an instant that in his mind wearing a mask makes him look weak.  He wants to be Macho Don.  He has 6 bankruptcies under his belt.  No one said he was smart.
It's Thursday.  Isn't this week just flying by?  In four more days I have another weekend.  I can't wait.  After that I'll be going into two 32 hour weeks, followed by a week of vacation.  I need to use it.  My anniversary date is 9/4 and I'll get another 3 weeks.  Yippee!
Of course, the virus is heading north again - thanks to stupid conservatives down south.  The ones who still believe it's a hoax.  And it's not just those southern crackers who think this.  I was talking to one of my friends last evening who works with an individual who makes that claim daily and then asks "Don't you agree?"  "Don't you think it's a hoax, too."  Stupid people.  And we are still in the first wave.
Walmart's enforcing a mask rule beginning Monday.  I brought it up in the lunchroom yesterday and there was a whiner there who said, "but what about my constitutional rights?"  I said nothing.  I know you might find that unusual.  I am not in management anymore.  Besides, he is in a shrinking minority group.  Those who adapt survive, those who don't?  They may be out of jobs.  There are a lot of people out there who have no problem adapting in order to get an Essential job.
Someone who didn't have an Essential job was Brad Pascale.  He heard the Idiot Jerk sing those magic words... "you're fired."  One thing I wouldn't want on my resume?  Being the Idiot Jerk's campaign manager, especially since that loser in the White House is slipping so far back in the polls.  That's not the kind of bullet point that looks good on your LinkdIn profile.
And finally, I have these purply things growing in my back garden. 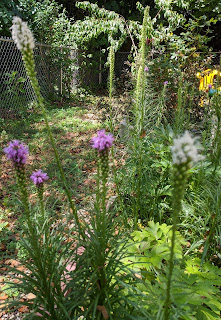 There are white ones, too.  Last year there were four, this year I have at least 12, and they're beginning to crash into my tomato cages.  They're pretty, but have no scent.
Posted by Dave R at 6:20 AM