It started with Reagan

Since I only work 4 days this week, this evening I will hit my short week Hump day.  Believe me, I cannot wait for my next weekend, which just so happens to be 3 days long.    After that, it's a week of work followed by a week of vacation.  Hopefully the temperatures will be a bit cooler by then.
We have customers who have issues with seams in their carpets.  If the dimensions of your room are over 12' by 12' (3.66 M x 3.66 M) two sections of carpet are going to be seamed.  This is so extremely common since most of us have rooms that are larger then that.  Of course, we have a couple who have a room that is 27 ' by 16' (8.23 M x 4.88 M) and they only want one seam.  We do sell carpet that comes in 15 foot widths and they can get one seam, but to do that they're going to be buying a lot of extra carpet, several hundred $$$ worth.  Yesterday, they got angry and said they were taking their business else where (that always means Lowe's).  More power to them.
There was an interesting opinion in the Washington Post which matches up with what I've been saying for years about the Republican party:  It Started with Reagan.  How do they get taught a lesson?  The American electorate votes the snot out of them.  Remember how they treated Clinton?  We need to treat them the way they treated Clinton, kick them like a dead horse when they're down.
I saw where Louie Gomert tested positive for Covid... they didn't say whether he had any symptoms or not.  I'm sure he's taking hydroxichlorquine since his deity has told him it works.
Oh, and Billy Barr has been running his on investigation into the 2016 election... and he's planning releasing his results prior to the election in November.  Does he really believe anybody besides the Idiot Jerk's base is going to believe him?  This is a desperate ploy to get them out to vote, to save the ass of the Idiot Jerk.  The minute Biden takes the oath of office, Billy needs to be taken into custody for treason to the constitution and the United States.
On my last 3 days off, I baked bread.  Doesn't it look delicious? 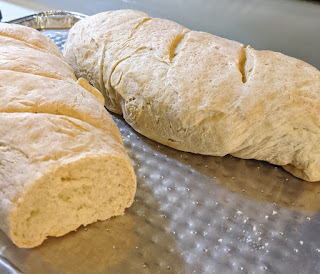