Okay, so it's Tuesday.  In case anyone is wondering, it's raining... again.
I spent yesterday on the phone, for the most part.  Catering has been arranged for my Mom's service.  We're going with Exclusively Yours.  I have no idea whether they are any good.  They had some decent Google reviews.  We'll find out on Thursday.
We're going with the Hanoverdale Church of the Brethren rather than the Rutherford Lutheran Church because... well, the Lutherans never got back to us.  While we were awaiting responses from the churches, I had suggested we just do the service at the Funeral Parlor and then take everybody who wants, out for lunch.  No go.
And, of course, the weather is supposed to be shitty on Thursday.  My brother called and suggested we change the day to Friday.  Well, my Mom is being inurned at Indiantown Gap Military Cemetery, next to my Dad.  For those who don't know, Indiantown Gap is the 2nd largest military cemetery, next to Arlington, in the region.  How big is it?  There are over 44,000 veterans and their spouses, interned or inurned there.  They are very busy.  You actually need to book a times slot.  Changing your time slot is difficult because they fill up so fast. 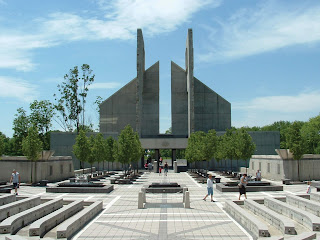 Then, of course, there was the death certificate issue.  You know there's a bit of a problem when you get a call from the County Coroner.  You see, my Mom went to the same doctor for years.  My sister-in-law did not like the doctor.  She thought my Mom should go to one who was more... professional.  In Pennsylvania, if you have a Personal Care physician, he or she needs to also sign the death certificate.  So the coroner goes to the old doctor who refused to sign the certificate.  Shit!  At some point the certificates passed into the hands of the Funeral Director, who ended up running around getting the required signatures.
And, of course, the Idiot Jerk in the White House is going all bohanga hanga with the Florida midterms.  He actually said it was 'infected.'  Well, of course it's infected, Rick Scott is there!  The truth is the Idiot Jerk is desperately trying to give his base at least one win... since they lost so much.  More so since they lost Arizona... to a white woman, who used to be a fighter pilot.
Finally, a bit about Stan Lee.  All of those years ago, when he created Spiderman, I don't think he had any idea how greatly he would be effecting the world's culture.  His Super Heroes had problems.  They didn't fit in.  They had color.  Superman was a hero for an age now passing, while Captain America is a hero for the ages, both past and future.  Thanks to him a flawed Iron Man saves the world and a Black Panther spreads equality.  They are more than cartoons.  They are more than Super Heroes.  They are us.
Posted by Dave R at 7:08 AM