Just some notes before I rush off to see my surgeon.
Russell Tovey playing an Out Gay Superhero fighting Nazis sounds like it should be right up my alley since I'm killing them in Wolfenstein II.  Evidently the CW has some sort of 2 night cross-over event in which this becomes TV reality.  Well, I watched the trailer this morning and wept... with dismay.  This is crappy, shitty TV written for people who have a maturity level comparable to that of 13 year old children, and Russell's story line appears to be minor.  Why,  they even have him wearing some sort of helmet mask.  Boo!  Hiss! 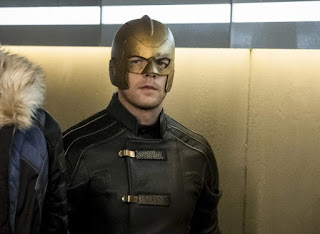 Oh, and evidently those Crazy Christian Conservatives in the House have tacked in a boatload of special shit in their version of the GOP tax bill which pretty much proves they have declared War on every thing they hate.  There is a problem, however, everything thing they hate is pretty much status quo for a large majority of Americans.  Tax Free Churches?  They should be allowed to tell their parishioners and congregations who to vote for in elections, and of course you know that if you don't vote they way they want you to you're going to burn in hell.  This will only get worse as long as the Idiot Jerk is in the White House.  You see, he loves them because they kiss his ass, they shower his ego with looooovvvve.  Idiots, all of them.
And since I won't be watching Russ this evening on the CW, I purchased "American Gods" the first season, for $10.  Watching something like that might cause a Social Conservative to pluck out his eye.
Posted by Dave R at 7:19 AM