All in the numbers

On November 8, 1952, at 0513 I was born. That's 65 years ago.  There are ramifications for such a birthday.  Firstly, I am a Scorpio.  Secondly, if you look at Numerology, I'm a 9, which is very good.  How am I a 9?  Take the month, 11 and add it together (2) and add it to the day (8), and add that to the year which as been added together (1952 = 17 added together = 8).  Add those 3 numbers together to get 18 and then add those two numbers together = 9.  This means I'm a Scorpio who's also a 9 or, in other words, I'm a very nice, sensitive person with a terrible temper.  I believe in equality for all but don't piss me off.  My Mom has told me she thinks I'm one of the most cynical people she's ever met - I don't call it cynical, I call it being astute.
I went to see "Thor - Ragnarok" last evening.  As of yesterday the movie had over $130 million in domestic sales, over $389 million worldwide.  It is very, very good!  Funny and sad, dramatic and light hearted and has Chris Hemsworth shirtless for over a minute.  My money says he reduced his body fat to 2% for just that 1 scene.  At 6 feet 3 inches, he's a little over 4 inches taller than I am... so what.  If you're interested, you also get to see the Hulk's butt crack, not surprisingly it's green.  I was a little concerned that Cate Blanchett might play Hela over the top - wisely she doesn't, but let me tell you, she's a Bitch with a capital B. 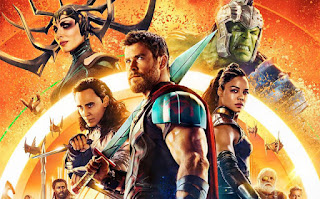 Also, there was an election yesterday.  Two governorships were on the line.  For those interested, the Democrats kicked ass.  While the New Jersey results were pretty much expected, Virginia was listed as being a toss-up.  No way!  Northam kicked Gillespie's ass by 9%, something like 54% to 45%, and overall the blue wall is beginning to surge (except for Utah....).  Voter turnout in that state was the highest in 20 years!  Shall we talk about slapping the Idiot Jerk in the face?  Especially since he thought his name might help Gillespie.  Wrong.  The GOP lost seats all over the place (except for Utah...).  These are number I really like.