I do have to say a couple of words about Dr. Robi.    She has been described by some as a "pop psychiatrist."  Me?  I think she's a jello head, I mean you can almost picture it wobbling around inside of her skull when she speaks.

First of all, I have a problem with so-called professional people using a catchy nickname in their attempt to be friendly.  While I'm friendly with my personal physician, I don't want to call him Dr. Bennie, and I don't think he would like me doing so.  He spent a lot of years earning that degree and, I'm sure, likes the formality which goes with the title.  It's a demonstration of respect.  I can almost hear her saying "If I let you call me Dr. Robi, will you still respect me in the morning?"  The answer is no.  In fact I don't respect her now.

Secondly, she appears on tacky reality shows attempting to be an expert, where her tactics and her evaluations seem to have more to do with ratings then anything else.  Is she smart, or just good at sounding smart.  There are quite a number of people out there who know just enough to be damn good bullshit artists, but that bullshit is just veneer and easily hosed off.  It wouldn't surprise me if her specialty of bullshit is psychotherapy.

Thirdly, there is her education.  This is where the "pop psychiatrist" bit comes in.  She started off okay by going to the University of Pennsylvania.  However, she didn't get her doctorate from that prestigious school.  She earned her doctorate through a correspondence course from a school I've never heard of: California Southern University.  This means she is not a Phoenix and will never do a commercial for them.  Now, I don't know about you, but I feel those individuals who want to validate themselves as "doctors" need to sit in classrooms, where there is a one to one interaction between themselves and their professors, and their fellow students, where ideas can be bounced off of each other in real time.  Corresponding through email just doesn't do it, neither does earning a doctorate that way.

This jello head recently made a fool of herself on national television by diagnosing Elliot Rodgers simply by watching his YouTube videos (can you hear that jello wobble).  Reality has come home to roost.  She's nothing more then a TV personality impersonating a Doctor.

What makes this even more pathetic is that she sells rotten jewelry. 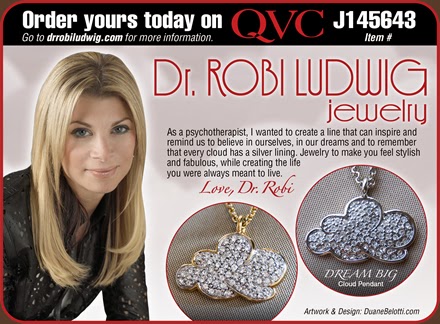 I have no idea who in the world would even buy this crap.  This is suppose to make you "dream big?"  If she was half as good of a psychotherapist as she thinks she is, she'd look at this ad and have herself committed.