Every now and then there are things that happen which rile the nation as a whole, he smack on the wrist Ethan Couch received after killing 4 people while driving drunk is one of them.  How do I know?  Well there is all of the hate flooding the airwaves and the Internet directed at the Couch family for one.  Then there is the fact that not only was his name released to the press, so were pictures of he and his parents, normally criminals his age are classified as 'juveniles' for public record.  But then this isn't your normal drunken juvenile case, he murdered four people while driving drunk and under age; and he got a smack on the wrist.  Not only were videos of he and his parents released, do a simple search and you're going to find out exactly where they live.  Guess who isn't going to be home tonight?

There are those out there who say he got away with murder, and technically he did, but thanks to the media storm surrounding his sentence his life is pretty much over.  He was raised to be a loser and will remain so till the end of his days.  I don't know if his parents comprehend how much hate is being directed at them.  Hopefully some of their wealthy friends have pulled them aside and bluntly said "you make us all look rotten." Slowly, but surely, they will find themselves being ostracized, believe me, the rich have done it before.  Face it, who will want the Couch's showing up at a party with all of their bodyguards?  And you can bet they'll be traveling with bodyguards, very expensive and highly trained individuals paid to protect the Couch's from the masses so eager to have their heads on spikes. 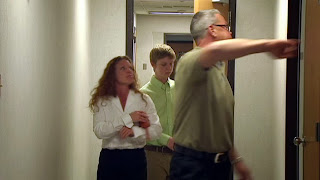 It's tragic four people had to die because neither Fred nor Tonya Couch realized that when he knocked her up they were actually creating a responsibility.  Because of this they went from being parents to mere breeders.  You know who I'm talking about, those people who make babies and then shit on the life they create.  The Couch's spent a lot of money on Ethan's successful defense and as a result the world knows they're shallow and self-centered individuals.  They've made people with money look terrible.  They have a sixteen year old son whom rehab is not going to help because, to put it simply, they are failures as human beings.  Hell, they're not even really good breeders.
Posted by Dave R at 5:43 PM