Carrie Underwood, going down with the ship

As one of the 18 plus people who watched the Sound of Music, I feel I am entitled to add my 2 cents to all the hub-bub about the show.  First of all, I enjoyed it, except for all of those damn Walmart commercials.  For a 'live broadcast' that cast had more breaks then any in the history of theater.  In fact, it was all those interruptions which came closest to ruining the production completely.  Live is not defined as 7 minutes of entertainment followed by 2.5 minutes of taped advertising.  If Walmart wants to buy that much time then they should be forced to do 'live commercials.'
As for Carrie Underwood's performance, it wasn't the greatest, she has a pop voice and no acting experience.  She knew that when the producers offered her the job.  I don't know if she took any acting lessons or not prior to or during the rehearsals - she should have.  Too many of her scenes just fell flat.  In fact I laughed out loud twice because her dialogue was so bad.  Most of the reviews I've read have been honest, but not mean spirited, not that there aren't any out there.  Hand handlers should have warned her - this was to be expected when a non-actor attempts an iconic roll in an iconic musical.  I did see her Tweet, I think everybody, everywhere, posted it, and while it might have pleased her Christian fans, any type of response demonstrates a lack of maturity.  She should have proven that she's tough enough to take it and let the matter drop. 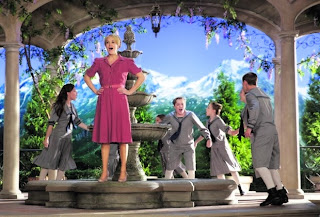 I was very glad they stayed true to the musical version rather then attempt some wacko version of the movie, which most likely didn't sit too well with a majority of the film's fans.  What an unpleasant surprise it must have been for them to discover that not only the Captain, but the Baroness and Max have songs -  they can sing as well.
As for Steven Moyer, I thought he did a good job in the roll of the Captain, despite of the handicap of his Co-star, one actor can not provide the chemistry of two.  One reviewer criticized him for losing his accent now and then - so what, I didn't notice it.
The costuming was, perhaps, one of the oddest I've seen.  Shorts on Rolf?  Didn't he worry about brush burns on his roll down the hill?  And that blue dress Carrie Underwood wore?  Holy Crap, she looked like she just stepped out of an old Doris Day movie.
All in all, it wasn't a bad production, except for those freaking Walmart commercials.  It was live - we rarely get to see live television except for sporting events and the news.  I doubt very much if it will become a Christmas standard, as some others do, there were too many errors in judgment.  The music wasn't that bad, but the rest of the show somehow went down with the ship.