Blogging, no big bucks there

For some unknown reason there are a number of people out there who believe there is quite a bit of money to be earned blogging.  Surprise, this is, for the most part, horse shit.  Now I'm not saying people aren't making money off of their blogs, but they are few and far between.  How do I know?  Well, I belong to a community of bloggers on Linkedin and the question was put out to the group.  Out of all the responses, only 5 claimed to be putting good money in their pockets.  The vast majority said they did it either for fun or had yet to receive any revenue.  Most of the comments were on the amusing side.  Evidently you need to average at least 25,000 hits per day to even scratch the income surface and a lot of those hits need to be clicking on your ads.  In some cases the ads, themselves, are not free. Nobody wants to pay for an ad no one else has any interest in viewing.  I've seen bloggers plead for people to click on the ads.  When that begins to happen you are in a very bad place. 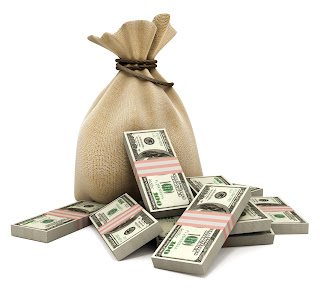 For me, the joy of blogging is in being able to say what I want.  I get to tell people about things I find interesting.  I get to point out what I believe to be stupidities to people.  Now and then I publicly question why something is happening, or why certain people do things.  If people read what I write, that's fine, it's just as fine with me if they don't.  Any one who starts blogging because they believe they're going to make their fortune at it has their head up their ass.  It's like wanting to be a major league baseball player, or be in the NFL or AFL, or any other sport.  Millions of people dream, but those who actually make big bucks are almost as rare as hen's teeth.
Posted by Dave R at 10:00 AM