The adult truth about the Wizard of Oz

"Oz, the Great and Powerful" opened in theaters last weekend and, to be perfectly honest, I had to laugh at all of the hub-bub about whether it was to frightening for children.  Why was I laughing?  Because so many reviewers and critics were looking at the original film with 21st century eyes.  Today we have film ratings, back in 1939 we didn't.  That was in the heart of the depression and going to movies was a great escape from reality, more so with adults then children.  In other words, the original film was geared for a wide audience of both adults and children.  Margaret Hamilton's wicked witch of the west scare them all.  The special effects are easily equivalent to the CGI of today; too many people forget that.  It was one of two films released in color, the other being Gone With The Wind, which guaranteed it would bring in everybody.  And, amazingly, it was one of two films to use a curse word.  Again, the other was Gone With The Wind, with Rhett Butler's famous "I don't give a damn" line.  So, where was this same word used in The Wizard of Oz?  When the infamous Almra Gulch tells the Gale family "I will bring a damn lawsuit that will take your farm."  Now tell me, in 1939, was that the kind of language geared for the kiddies? 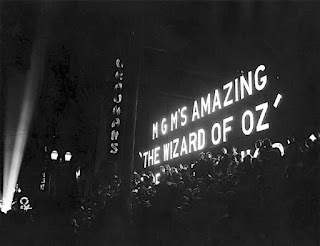 I would bet my left nut that when Louis B. Mayer green lighted the original he did not do so because he wanted to make a children's movie.  No, he wanted to make a movie that would satisfy all audiences, both young and old, because that's where the money was.  Remember, Hollywood has always been about money, and making entertainment pay.  In the 21st century movies for children have become big business, 75 years ago that would have been a losing proposition.  Financially, the studios needed to bring as big an audience into the theater as possible, which is why the scares in the most important of Oz films had scares to make everybody cringe, not just the little ones.

I suspect that Oz, the Great and Powerful, like the classic film, was designed to please everybody.  That's what makes a film last forever.  The more people it satisfies, the longer it will hang around, which is what so many people want: film immortality .