For those who missed the NBC Sports coverage, Fabian Cancellara won the Paris-Roubaix on Sunday.  Because I have an interest I have several cycling apps on my tablet which give me updates so I found out late Sunday afternoon, EST.  To my amazement, NBC Sports aired the race... at 11 PM EST, about  8 hours after the race had been concluded and the winner announced.  They then re-telecast the entire race yesterday starting at 5PM, EST.  As a cyclist, I know how nice it is to be even vaguely considered by NBC Sports.  We have American cyclist and American teams racing and NBC Sports has no problem in handing them the shitty end of the telecast stick because... well, let's be honest, it's just cycling.  They don't care because they don't see any viable ad revenue.  I had to laugh at what advertising they did air:  Evenrude outboard motors, 2 cycle vs 4 cycle.  If you own a Cervello, or a Cannondale, or a Trek, I would say there is a good possibility you might not be interested purchasing an outboard motor, or a boat for that matter.  There was no advertising about gears, or chains, or saddles, or helmits, or riding kits.  Of course, these are the things cyclists are interested in, not motorboats.  With all of the great bicycle manufacturers out there, not one name was mentioned.  There were, however, a number of Gatorade spots, but none of the featured a cyclist.  But then, by would you expect something like that from Gatorade. 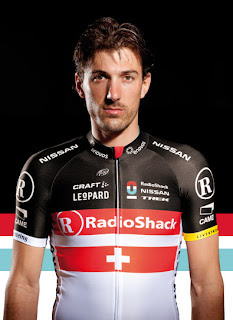 Congrats to Fabian Cancellara!  I'd like to see one of our great, steroid giant baseball or football stars race for 5 hours and 45 minutes, a lot of that time over cobblestones, and survive.  Hell, I be interested in how many could even survive an hour.