Since 1947 people have been talking about Roswell.  At first there were just mutterings, but during the early 60's, something happened, Betty and Barney Hill.  That's when the alien talk took off, so to say.  There was a movie in 75 about them and then those dear little aliens showed up in Close Encounters.  Suddenly you weren't anybody unless you happened to have seen a UFO.  Jimmy Carter saw one.  Then, of course, there were the abductions.  It was almost like "be the first on your block to be hypnotized and discover you've been abducted."  Most of this was horse shit; people needing to be recognized as having had to deal with an anal probe.

As you can tell, I'm not truly impressed by most of the so called authorities and their invented data.  This doesn't mean I don't believe there might be UFO's, in fact, I suspect there probably are, however the logic takes over.  If they are real and they are being observed, then they want to be observed.  Which brings me back to Roswell. 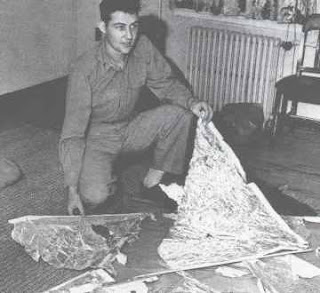 This is a picture of some of the debris which since been declassified by the government as some sort of weather balloon (read possibly spy balloon).  That's what it looks like.  My main problem with the whole Roswell alien crash is that what superior species would design a craft to travel light years through space only to have it crash in Arizona?  Remember, this is a superior species so the idea of their  craft crashing is a bit ludicrous.  We can't even send men to Mars, yet they can send them light years.  Maybe they used a wormhole and didn't have to worry about going faster then the speed of light.  How many wormholes do we know of?  No matter how much you want to believe, the logic thing keeps it from working.  These ideas were formulated in a much more simpler time and place.  Some people want to believe.  That's fine, what ever makes them happy.