Is the Republican Party dead in the water?

I pretty much think so.  Do a search on "racial tweets?"  Holy crap!  I was stunned when I saw much hate there is in the Republican Party, it's like a cancer in their bones.  Now you have some 34,000 in Texas wanting to secede from the United States.  You do know these are the same people who, back when Bush wanted to go to Iraq, damned every one who disagreed as unpatriotic.  When Obama was elected for his first term, instead of taking a step back and analyzing what had gone wrong and what they needed to do to put themselves on an even keel, the Republicans moved farther to the right.  They just don't seem to understand the electorate moves right down the center line, swaying a little to the right but then back again to the left, but just a little bit.  The electorate knows if they go too far to either left or right this ship is going to capsize.  The Republicans don't understand this at all. 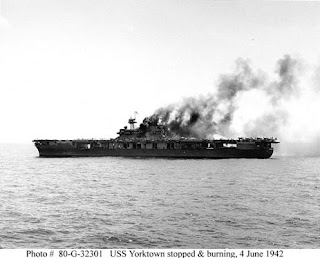 I was going to use a picture of the Titanic but too many people lost their lives with that one, the Yorktown is better, it was dead in the water but survived.  Actually, I believe the Republican Party needs to decided if they're going to be on the Titanic and sink or on the Yorktown and float.  If they're going to float they're going to need to something about the racism.  The only way they're going to win another presidential election is by incorporating blacks or / and Latinos and the racists, well, they'll probably have to find another party.  The GOP might split into two  parts, or three parts: social conservatives, fiscal conservatives, and the Tea Party.  In order for the Republicans to put another man in the white house I suspect one of those three groups is going to get the shaft.  I'm betting it's the Social Conservatives.