The conventions are over and I suspect a lot of political junkies on both the left and right are hyped up for Rockem Sockem campaigns from both parties.  If you thought the Super-Pac negativity ads were bad before, hold on to your hats, there are going to be so many below the belt punches a vast majority of the American people may have problems walking.  Not me, I rarely watch commercial television so I will not have to endure 7 minutes of hate separating the funny parts of my favorite sitcom.  Talk about a stimulus package, all those billions of dollars being spent should do more then jump start the economy.  I am surprised that the Conservative Republicans are asking their devout, Christian base to do the most liberal thing possible:  vote for a non-Christian.  This sounds so much like what the Democrats would do, not the Republicans.  What I remember most from their primaries was that not one of the potential candidates could satisfy their base.  Santorum was too, too crazy religious, Bachman was just way, way out, and Romney was a Mormon. 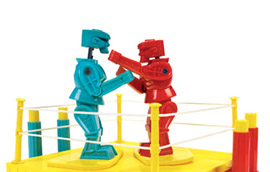 Now these two candidates are going to be duking it out.  I think it's  pertinent one of them is red and the  other is blue.  Unlike the game, however, this campaign is going to hurt, both the candidates and the American people.  We, who want to show the world how civilized we are, will be doing just the opposite.  If Obama wins the Republican House will be all the more partisan, another great example of American politics in action.  The more stumbling blocks they put in his way the easier it will be for them to win in 2016, at least that's what their plan will be.
Posted by Dave R at 3:45 PM