One of the big things to come out of the RNC Convention is the public dishonesty of Paul Ryan, he makes things up and changes facts.  I thought it funny watching Conservative reporters dance around this subject, pretty much saying that at a convention facts could be subjective and not objective.  Of course, this is something the party has been doing for years.  It was the Little Bush who said "if you repeat something often enough people will start to believe it."  So, when Ryan blames a Obama for letting a plant close while the Little Bush was president one can only wonder if he doesn't understand veracity.  Or, perhaps the truth is he hits the confessional booth on a daily basis. 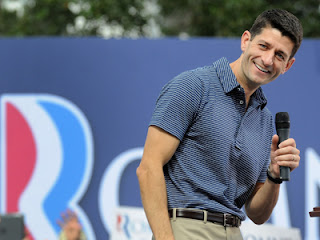 The problem with Ryan's lack of honesty is people are checking his facts.  People are tired of politicians just out and out lying.  One of the latest facts to be checked was Paul's claim to have running a marathon in under 3 hours.  Hhhmmm.  Serious runners, and those not so serious, dug deep.  He did run a marathon.  But then the truth runs out.  Independent voters find this chronic lying offensive, doesn't the Republican Party understand this?  I guess not.

Email ThisBlogThis!Share to TwitterShare to FacebookShare to Pinterest
Labels: Marathon, under 3 hours