When Mass Effect 3 ended there was nothing else to say but "that's all folks!"  Except gamers were so upset with the ending EA released a Free DLC which detailed the ending, making it more complete for a lot of people but that didn't mean they were satisfied.  I didn't down load it.  Instead I watched a walk through on YouTube.  I mean, why take up space when nothing was going to change.  On Tuesday a second DLC was released and I didn't pay to download it, some did, probably a lot did but not me. 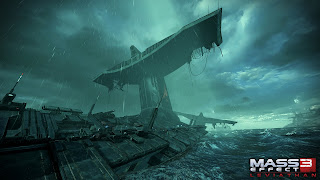 Yesterday I watched a walk through and at least three times during the 14 minutes it played the comment was made "but nothing is going to change."  That's the hard truth for anybody who thinks other wise.  Characters who had died were suddenly brought back to life but who cares, they're still going to die.  This is a big problem for EA.  With the first two installments there was always the knowledge a third segment was in the works.  According to EA there is to be no 4th installment, it was a trilogy and nothing more.  So if the story line is dead, like a lot of the characters, why pay for additional content?  Nothing is going to change.

Email ThisBlogThis!Share to TwitterShare to FacebookShare to Pinterest
Labels: Leviathan, ME3 DLC