Well, it's Tuesday and my first load of laundry is in the dryer.  My 2nd, sweatpants, will be going into the washer shortly.  Moving both washer and dryer to to the 2nd floor was a smart move, since the big PC is up here.  The only thing I don't like is the vinyl floor - it's faux marble, has a lot of white which shows up dog hair.  Holy Crap!  I had no idea there was so much dog hair floating in the air around me.

We had a big carpet carpet install returned.  There are 7 rolls of  shrink wrapped carpet sitting back in receiving, each with the dimensions of a room written on the wrap.  Beaucoup Bucks $$$$.  The customer claimed it was the wrong color.  Well, that's a lie.  I can remember 2 times when the wrong color carpet was sold.  Both times, the installation was stopped before the installers cut a single piece of carpet.  I'm betting that in this case, wrong color means the customer didn't like the carpet after it was installed.  I don't doubt this happen more and more frequently because carpets are expensive now.  Two years ago, the same carpet would have run $3.25 a square foot, today it costs $5.37 a square foot.  American capitalism is destroying itself.

Back when the electrical work was being done for the laundry move, I used a small piece of plywood to keep Biggie at bay in the kitchen.  Believe me, he so desperately wanted to go hang around with the electricians. 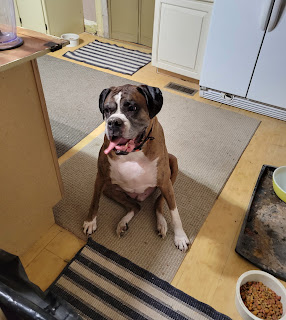 You know, it doesn't seem a day doesn't go by without Ronnie DeSantis doesn't do something that heralds his turn to the far right.  Black people are furious about his attempt to whitewash their history.  Ronnie doesn't understand.  He desperately wants Florida to become the white Mecca.
The voters in George Santos' district are furious with him.  I would be, too, if he represented my district.  While Democrat and Independent voters want him gone, some Republicans, though still claiming to be angry, would rather he stay.  They don't want to lose his vote and they're worried that they'll do that if there's a special election.  They are totally clueless as to how badly this hurts them with the voters.

Republicans are also suffering from multiple identity crises.  A outstanding example of this is in Butler county, in western PA, where not two, but three different groups are claiming to be the true Republican party.   These problems are only going to multiply for the party of Trump.  I find this hysterical because this is happening to the Republican party across the entire country.  They are using their "shut up, I'm in charge" tactics upon themselves.