Sleeping in the bed you made

Well, it's not snowing, though the weather map has a blue snow cloud sitting right over my head.  I don't work today, so a little snow, and a little shoveling wouldn't be a bad thing.  That's what we might get, just a little.  Prediction is for possibly 2 inches.  There's a rather large storm system to the west of us, so Pittsburgh is getting hit, but not us.

I spent a little time yesterday packing up my PS4 Pro.  Buying it was a mistake.  I never found the exclusive games Sony was offering that interesting.  I like Sony's TVs, but their gaming? meh.  And since they've released their PS5, the value of a Pro has dropped, meaning I'll see if I can find someone to give it to.

Yesterday was also Tax day.  I used the Online Taxes even though I earned to much, or at least thought I earned too much.  In the end, they said their calculations had me earning less that their maximum adjusted income requirement so it was free.  As usual, I'm getting a rather nice refund, that should pay off the laundry room.

Saw this yesterday and I had to laugh.  Just think, 74 million people voted for this. 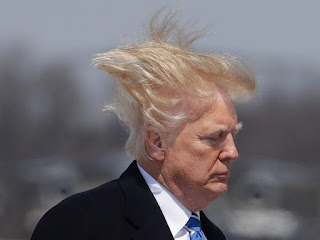 As expected, Kev McCarthy is keeping Adam Schiff and Eric Swalwell off any and every committee he can.  For those who don't know, this is Republican Retribution.  You see Kev wanted to put disruptors on the January 6 committee and when Pelosi rejected the likes of Jimmy (shower at your own risk) Jordan and Marjorie (I celebrated my divorce by getting a nose job, Taylor Greene) he threw a hissy fit and pulled all the disruptor names.  Schiff and Swalwell's rejection is nothing more than Kev's revenge.
And for those complaining about a lack of indictments against Trump, et al, well Fani says they are imminent.  People need to prepare themselves.  The MAGA cult is not going to take this lightly.  There will be protests, possibly violent.  Conservatives gambled on extremism.  They are bad losers and their radicalism will be on full display for the world to see.  The ramifications will hurt them for years to come.  This is how a political party splinters.  Parts of it will die.  They made their bed, now they have to sleep in it.