We have fog.  Dense.  Not the sort of thing you want to have to drive through in the dark of night.  Accu-weather sent our warnings.  Sadly, the sun will begin to burn it off... just before the rain arrives.  Yep.  More rain is on the way.  The temps are supposed to climb into the low 60s (F), quite unusual for January.  After today, temps are supposed to cool down and become more seasonal.  For us here in Central PA, that's usually in the mid 40 (F) range.

Yesterday was fairly quiet here.  I worked on the 50 gallon tank for a bit.  Worked on the new book.  Not surprisingly, I decided to throw-out half of a chapter and do a rewrite.  That's how it goes.  Last week I edited out a section where Eli and Bobby have a discussion about the shape of Black Holes.  It was interesting, but had nothing to do with the story.  For those interested, Black Holes are not flat, nor are they convex on concave.  Most of us think of them as being similar to whirlpools, with a spinning edge that sucks everything in.  They're actually sort of pill shaped.

They're working on the house next door.  This is the first time workers have been there during the day, usually it's late afternoon.

And for today's picture, I chose this one, of Kev McCarthy after his 3rd loss. 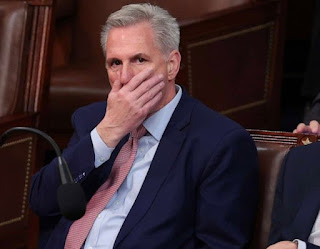 I don't if any else saw, but Ted Lieu took a bag of popcorn.  Me?  I kept laughing.  Vote after vote, after vote.  The Republican implosion is really beginning to take off.  Part of the problem is the American Freedom Caucus, which the party has let run rampant in the House for years.  Many of them are still aligned with Trump, and are still election deniers.  The fact that he diminishes them is something they will never understand.  Had the Red Wave happened, McCarthy wouldn't have had to deal with them.  Even when the Republicans do manage to elect a speaker, don't expect much to happen.
Jack Smith, who had been waylaid in Europe because of surgery, he'd had a serious biking accident, has quietly returned to the United States.  Prepare for indictments to follow.  With each indictment, the Republican party, and the American Freedom Caucus in particular, is going to implode.  Self-destruction is eminent.
And, finally, George Santos wandered around inside the capital yesterday.  The first thing that went through my mind when I saw him walking the halls was that he was wearing a sweater.  (Did you hear me laughing?).  The second, and most obvious thing I realized was that no one was talking to him.  He was completely ignored, and I could only wonder what he thought was going to happen.  After all of his lies, did he believe lying Republicans were going to meet him with open arms?
Posted by Dave R at 8:43 AM